Unlock Art: Where are the Women

Much of what is discussed in the recent Tate video, "Unlock Art: Where are the Women," with Girls' star Jemima Kirke succinctly and humorously explains much of the impetus for my 2012 "Re-Model" installation.  Participants in this installation were asked to essentially white-out Ingres' Grand Odalisque (a copy I created faithfully using his palette and methods -- probably about 60 hours of time) by squeezing latex breasts -- for me this piece looked to reset the canvas in the museum -- to make it more female friendly.

First, the woman in Ingres' painting does not own her real identity; she is simply a decorative figure, in this case made even less herself through decorative elements meant to convey orientalism.  We hold the image of this woman in our minds, but she is forever of the painting and never herself.  The model helps make the career of the figurative artist, but if their identities are not celebrated, than they are negated.  Hence, one of the reasons I wished to remove her from her confines in my installation.  I cannot give her an identity, but I can remove her from a symbolic state that is not her own.

Second, the female artist, in her fluidity, communicates through the gaps.  In  the fluid consumption of Ingres, a stoic male figure of the French Academy, the female artist forces viewers to contemplate both the semiotic and symbolic.  Almost as if returning to mother's milk, a purely semiotic state, will clear the way for a new, more balanced playing field for women in the art world. And yes, the audience is asked to squeeze breasts mounted to plaques, something that would seem solely objectifying. And yet the breasts are not there to looked at for pleasure, but rather, much to the surprise of the participant, when they are squeezed they lead to the destruction of the painted symbolic image of objectification.

Third, I have read a lot about the ways in which women have worked to infiltrate the art world, and yet as is the debate within feminism as a whole, I wonder at the lack of recognition of the maternal role as something worthy of serious investigation in art.   Neo-Maternalism: Contemporary Artists’ Approach to Motherhood, an article by Sharon Butler, holds up a few examples of women artist who have successfully integrated motherhood into their work, but takes a moment to disparage new mother artists for making art that is "idiosyncratic, excessively inward-looking “baby art." that is "too sentimental for leading edge galleries."  This article makes a strong case for the changing tides of acceptance of female created art about motherhood, but also begs the question right there -- why is the sentimentality of parenthood invalid for cutting edge galleries?  The denial of the sentimentality, of the softness and attachment, is a denial of a portion of motherhood -- the exact portion that fathers often say they cannot feel until their children are old enough to do something -- to make their way through abjection ("This process of separation whereby the child must reject and move away from the mother in order to enter into the world of language, culture, meaning, and the social." Wikipedia, Julia Kristeva)

Oh, and lest anyone think otherwise -- I really love Ingres's work and a lot of other male painters too.  As an aside note, this installation was very much about my own desire to paint using Ingres' methods!

So first here is the video that inspired the blog, and after there are images from my installation and a video I threw together (it deals also with the "other" and colonization, because I don't think you can look at Grand Odalisque and not deal with those issues).


Pictures of Re-Model from Show-Offs: Hallwalls Artists and Models 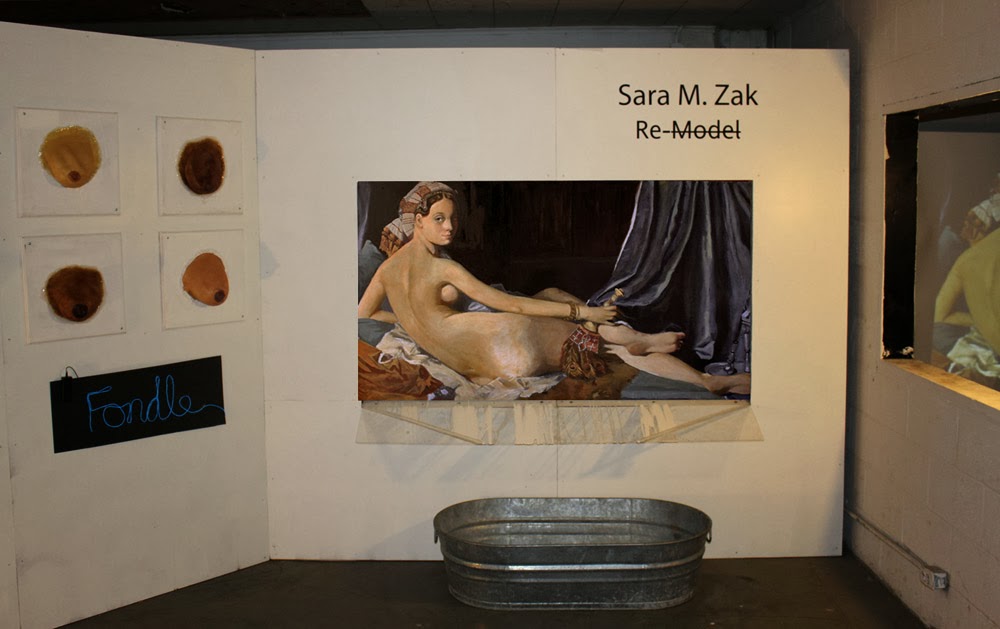 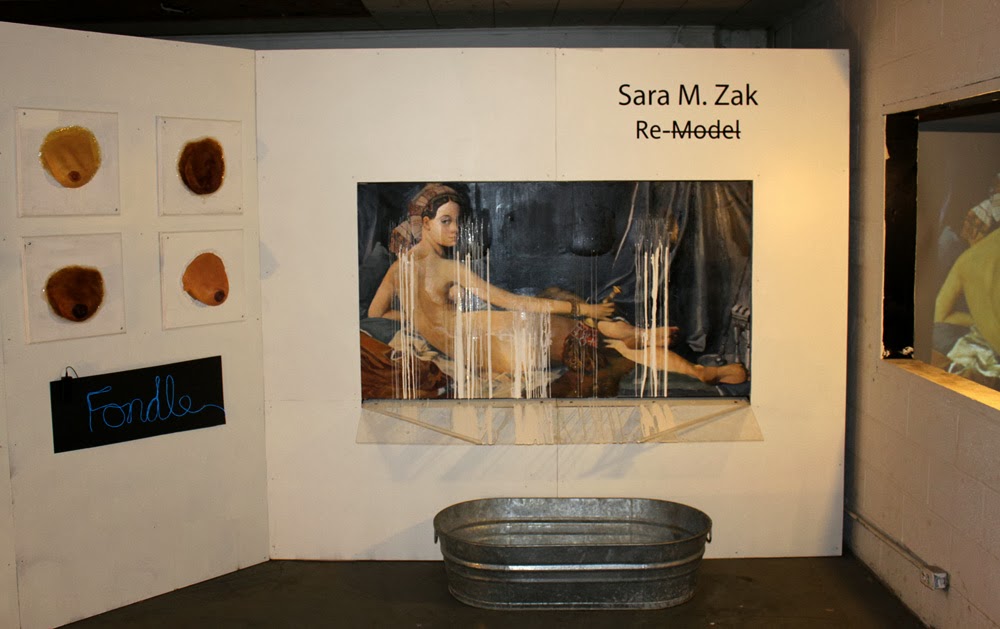 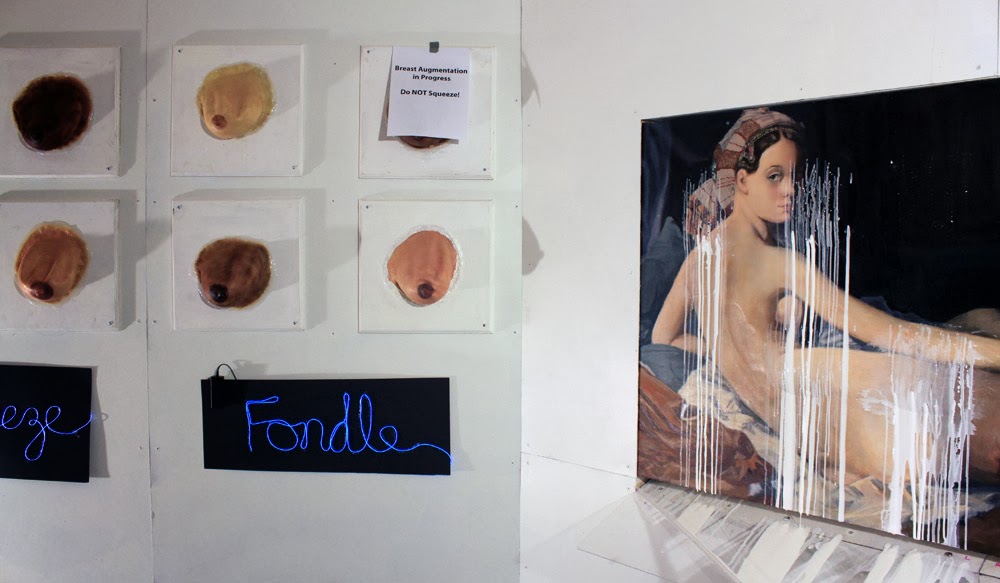 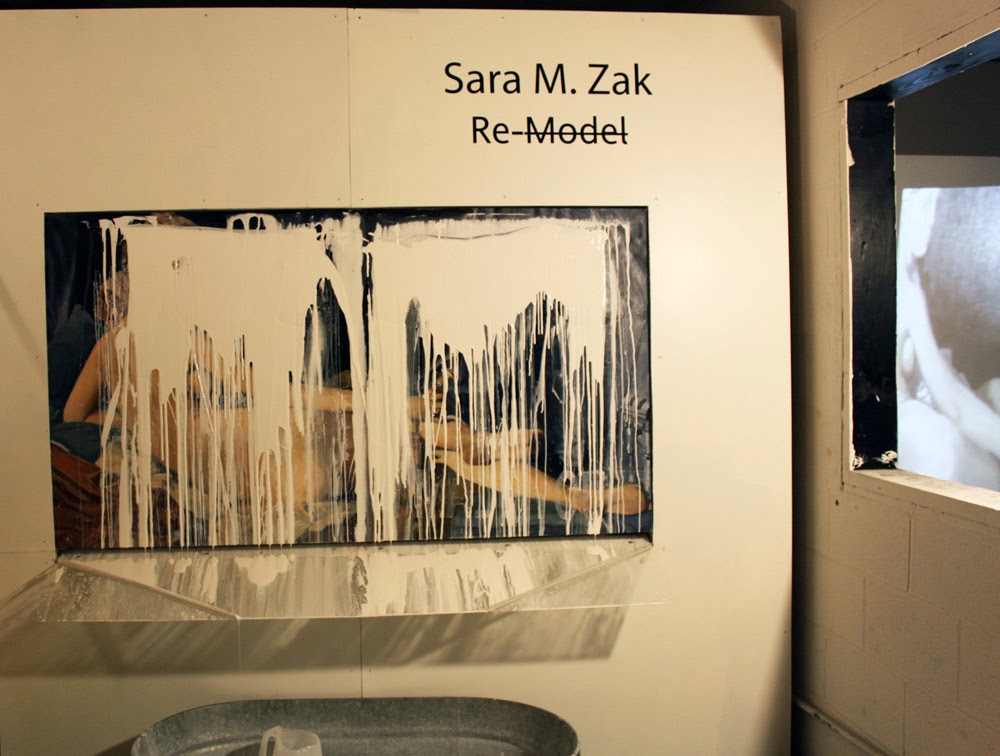 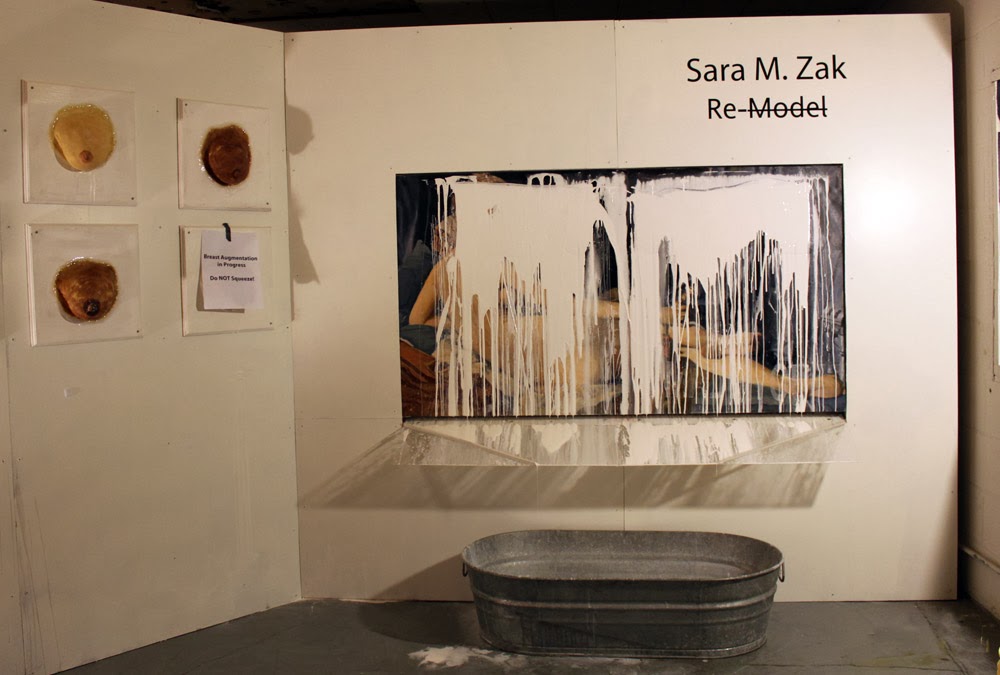 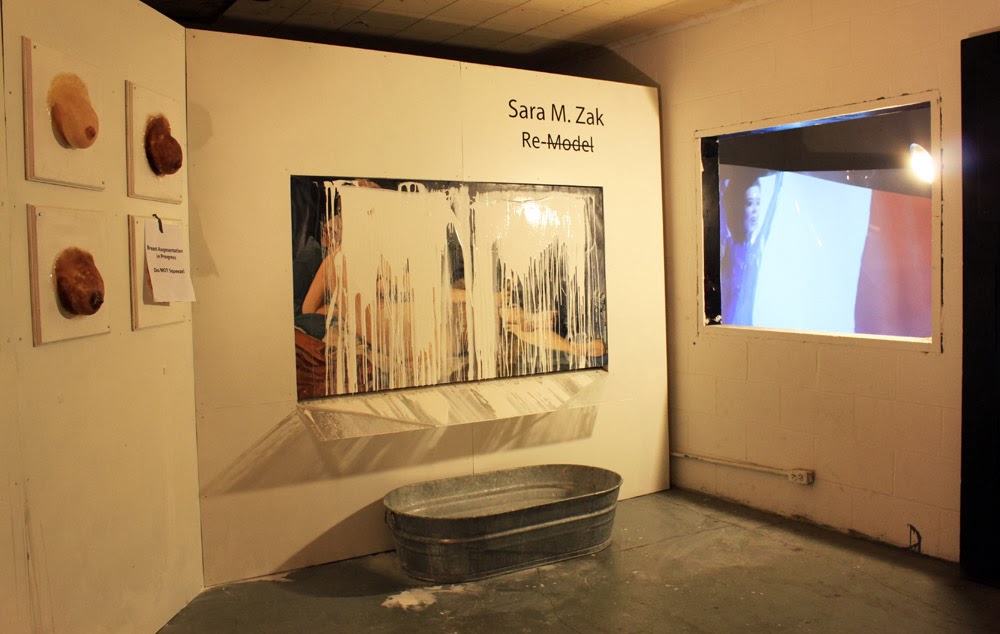 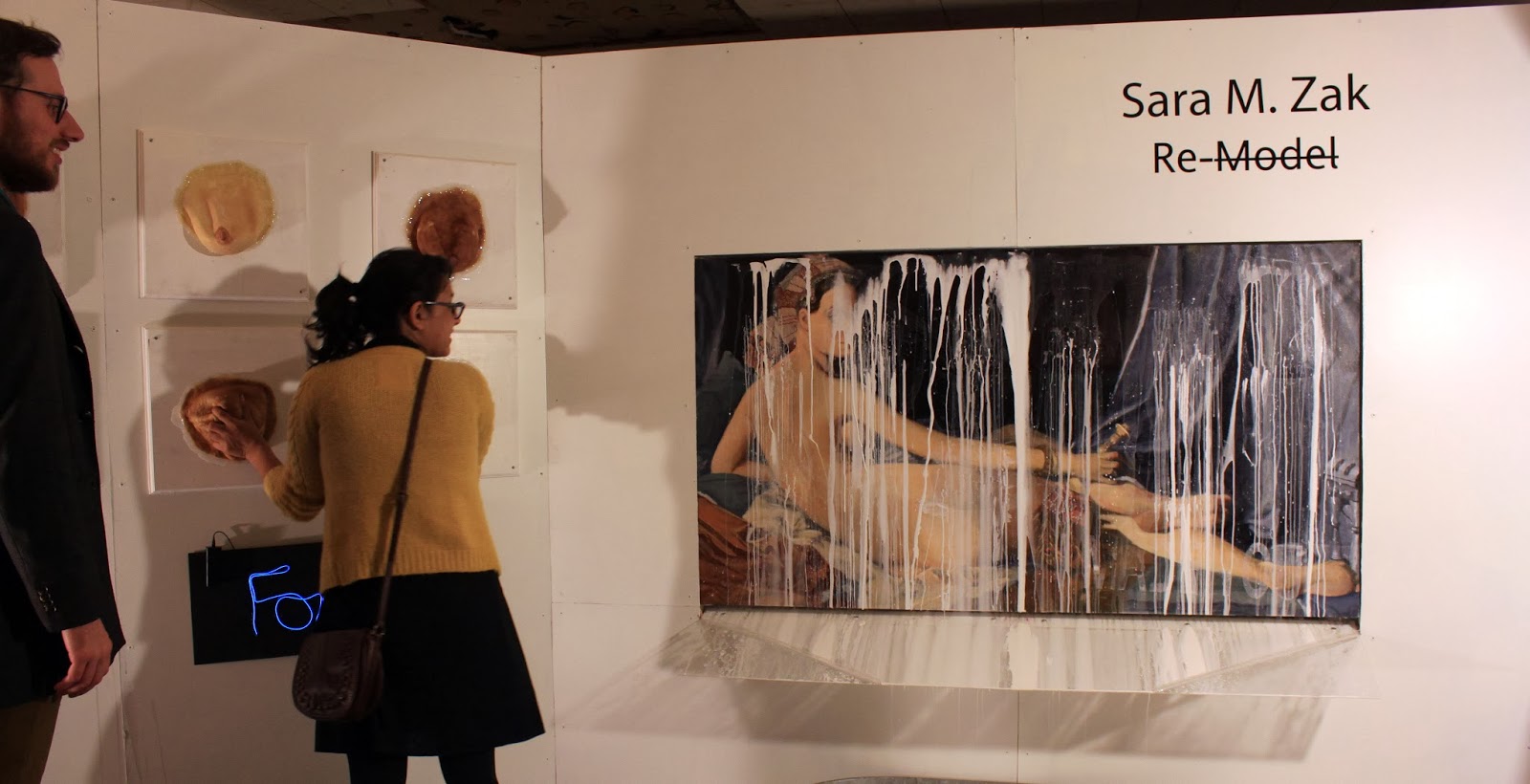 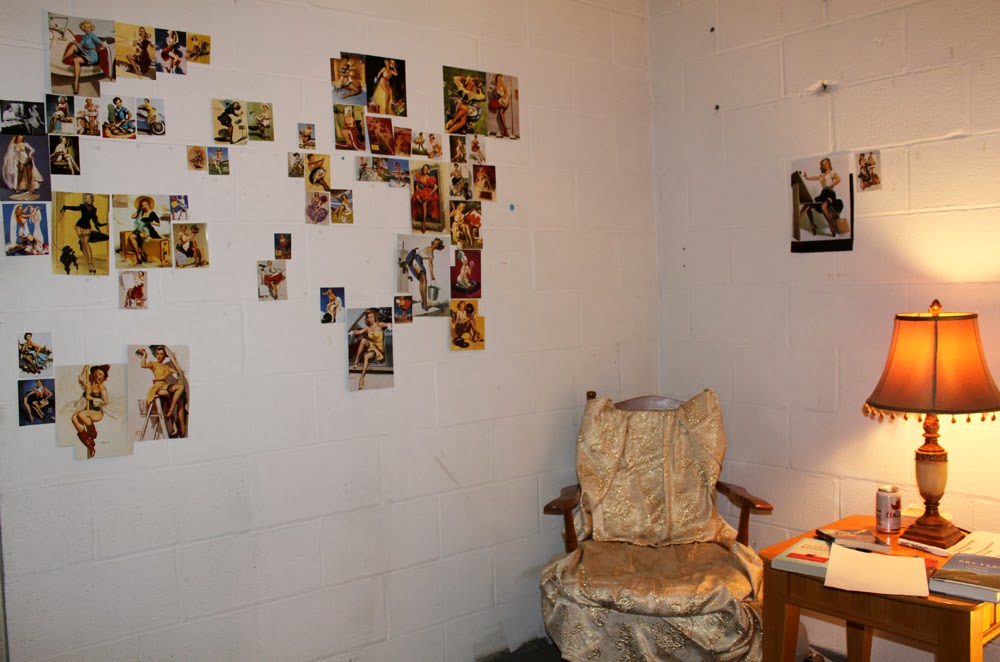 Lastly here is the my first video ( or my crash course in Adobe After Effects); it a collage of me painting, images from Shakira videos, and a number of appropriated clips from youtube meant to convey motherhood, artmaking, and colonization.

Video Component of Re-Model: a painting installation by Sara M. Zak from Sara Zak on Vimeo.

Sara M. Zak
New York, United States
I am an emerging Western New York visual artist specializing in oil painting. My work focuses on the shifting nature of time, place, and paint. I seek to marry art-making technique and materials with concept.